Yes I am nuts – too much disposable income. Just kidding. It was for a special occassion so don’t get all excited that I’m quadrupling my budget for eat outs. Hammerheads is quite famous (apparently) for its seafood. I decided to try Hammerheads because I’ve heard good things about it (and also bad). For those who don’t know where it is, it’s quite near Kelly Tarlton’s Antartic Encounter and Underwater World, on the way to Mission Bay if you’re coming from town.

Looking at the menu in Hammerheads can be quite intimidating, nothing costs below $10 except for the beer. But I think it’s a must try (in a lifetime) for a special event. So when you get that bonus, or win that Lotto ticket, why not?

Some of the food sampled are shown below: 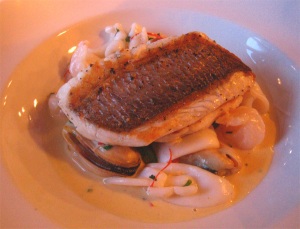 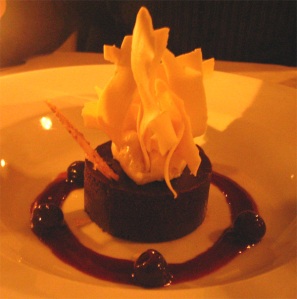 Dining at Hammerheads really did hurt when paying up. They even have an “electronic tip” option on their Eftpos machine!!! I think people just have too much frickin’ money. Service-wise, they didn’t do so well for my table. I guess they were busy tending the ones that were paying $100 per head. I have read reviews that their service was the best. But I felt that was not the case.

I think there would probably be places that serve the same dish at much lower prices, but at Hammerheads they are of a high standard to be honest (and the view is pretty awesome). The starter was scallops for $23, for 2 pieces it’s not a lot but it’s fresh and the sauce was quite delightful. The mains were the beef fillet and snapper, and surprisingly I preferred the beef. The snapper was $36.50 and beef fillet was $38. Not bad pricing eh?

In the end, I found their dessert to be the best I’ve had for a long time. The chocolate cake is rich and for $17 it is quite reasonable. Worth it. Overall, a good experience and no complains about the food.

Personally, a rating of 9/10. Great food. But not for the thrifty. It’ll be a looooong time till I come back to this place, perhaps when I get that pay rise or promotion. =)